When sending emails, creating ads or websites, you must often wonder which header would be most effective. Which graphics would work better in your ad? Which colour button would be best? Should you add a photo or bet on minimalism? Having consulted all these aspects with your colleagues, you know that there as many opinions as there are people.

Is it possible to find the correct answer to these questions? The solution is very simple – put your users to the test. The sending of mailings or running an advertising campaign on the Internet are intended to encourage a specific reaction. A/B testing will tell you which content, layout or photo are more suitable for your target group. Remember that users of different websites may react differently. Do not take the buttons used by the competition for granted. ;)

You’ve probably come across this term many times before, but do you know exactly what it means? The A/B test, also called the comparison test, consists in comparing two different versions of a project in order to determine the more effective version. Their effectiveness can be assessed using factors such as CTR, conversion rate or Open Rate.

The tests show which element on a website is more effective in encouraging users to act and fulfil the objectives you have set. The most common comparison is made between the original version (version A) and the alternative version (version B). Each version (e.g. website, mailing, advert) should receive the same percentage of web traffic for the test to be credible. The winning version is the one which achieves better results, for instance, according to the conversion or click-through rate. 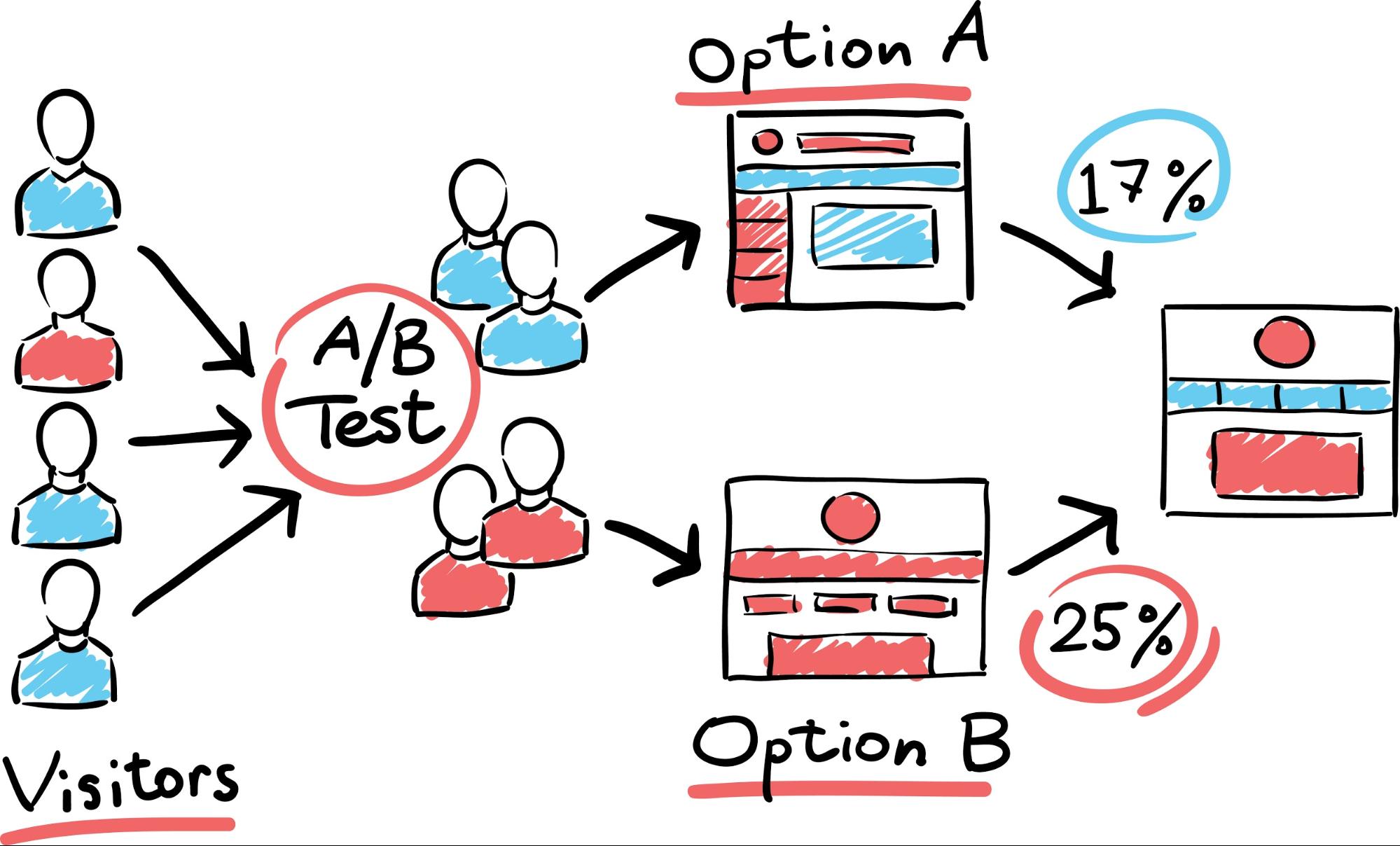 Practically any test you choose. :) A/B tests are a very important tool which can be used to study the website’s effectiveness and optimisation. The button used on the page is vital to the fulfilment of the website’s objectives. A change in colour, the message displayed or layout can have a big impact on the conversion factor. The existing set of good practices states that if your website’s colour palette is made up of cool hues, a warm colour of the button will attract more attention and vice versa. However, it is always recommended to test this concept first.

Depending on the purpose of your website, another crucial element may be, for example, a form or a path which takes the user from making a purchase decision, through the shopping cart, to making a payment. The effectiveness of these features has a considerable impact on your company’s profits. Remember to check if the number of fields required in your form is optimal. Sometimes, letting go of even one field may significantly improve the conversion rate (number of sign-ups). You should also pay attention to the location of the price, buttons and the visibility of the shopping cart icon. Create appropriate tests and find out how the users react.

There are numerous A/B testing tools on the market. Google Optimize is a free-of-charge solution which enjoys great popularity. It is very intuitive and simple to use. With its assistance, you can create A/B, multivariate and redirection tests. You select a page to be tested (version A) and use the interface to make changes to the alternative version of the page (version B). For example, you change the colour of the button and run the test.

By combining this tool with Google Analytics, you can track the clearly presented results in the Experiments tab and evaluate their effectiveness.

By testing the button on the page you can see how many sessions were generated in the experiment for each version of the page. You can also check the size and conversion factor that will allow you to determine which version would be more effective.

How to test your mailings?

The average recipient receives dozens of emails every day. What decides which email is opened? First and foremost, this will be an email from a sender which the recipient knows and trusts. The addressee knows what to expect. Decide whether it is best to use the brand name (from: FreshMail), use the first name and surname for a more personal approach (from: Monica Stephens) or use the first name and brand name (from: Monica from FreshMail).

The subject of the email is another element which has considerable importance to email openability. It should arouse the interest of the recipient. If you wish to find out what works best for your recipients, it is necessary to put many different options to the test. It pays to try two different subjects, for example, “Don’t miss out on this promotion” and “Night sale not to be missed” and verify their effectiveness.

As part of our tests, we sent an email to some of our subscribers inviting them to download an ebook. The first subject addressed the recipients by their first name to personally encourage them to download the ebook – “Monica, collect your free ebook on how to create a mailing list”.

The second subject was written as a question – “Are you sure you can create a mailing list correctly?” The first, personalised version proved to be the winner. The number of read emails was higher by 3.5%. Such a result will allow 350 more users to read your email if your database numbers 10,000 recipients.

You are certainly aware of how important it is to test advertising campaigns. To this end, Facebook Ads has recently created a special interface called “Test and Learn”. With this tool, you can test your campaigns to verify their effectiveness. There are two types of tests to choose from, and both use the “lift” measurement method. Facebook’s mechanism will help you determine which ads generate better results for your business, depending on your chosen goal. The first test allows you to measure the increase in conversion. The second test is about the increase in brand recognition or how it is perceived through advertising. Unfortunately, this test is designated only for big players, because a budget of at least 30 thousand dollars is required. 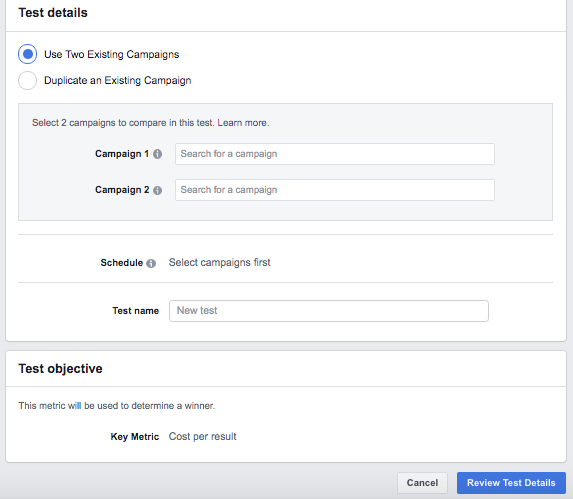 Another feature offered by Facebook are comparison tests. They allow you to compare different versions of adverts, which lets you improve your subsequent ads. The test should last from 3 to 14 days. With a shorter period of time, an insufficient quantity of data might be generated, while the budget may be used inefficiently if that period of time is too long. When the test is completed, you will receive a notification with the results.

To run such a test, select the “comparison test” option when creating a new advert, choose which features you want to verify and specify the number of ad groups. 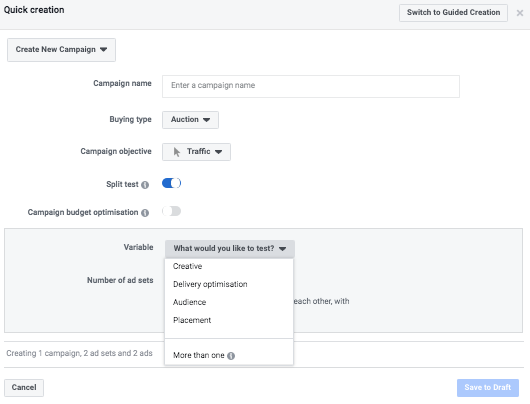 Source: Facebook.com – how to create a comparison test

Facebook points out that the tested campaigns should differ in only one significant aspect. This might be, for instance, the recipient group, a photo in an ad or the email’s header. The more differences there are, the more difficult it is to estimate the effectiveness of the tests.

It should also be mentioned that the FastTony website offers the possibility of creating split tests using Facebook. The website’s interface allows you to create a maximum of 5 headers, 5 contents and 5 different ad creations. The system automatically jumbles up the specified items and determines their effectiveness. As a result, you can receive as many as 125 different advertisements.

Google considers the user-friendliness of a website to be of crucial importance. Its effectiveness affects the quality of the advert in Google Ads. Other factors which have an impact on the quality result include the expected click-through rate and the ad relevance. The quality score is assessed on a scale from 1 to 10. The higher the grade, the less expensive the ads and the higher their position.

How to test ads in search networks

The website encourages you to create up to three versions of standard adverts using the Google search network. It is best to test a limited number of elements. Create a variety of adverts similar enough to be able to easily draw conclusions based on the differences between them. You can change the order of headers, add keywords or special characters. Even a small change can cause your CTR to rise sharply

I performed a test using the Google Ads platform. I created two versions of an advert which differed only in special characters at the displayed URL. The size of the tested group was quite small. However, it was possible to say that the second version (with special characters) was more popular among recipients already at the start of the advertising campaign. The result was a three times higher click-through rate.

Currently, Google’s priority is to make mobile pages faster. Such websites usually translate into more conversions, so Google recommends using Accelerated Mobile Pages (AMP). This solution enables you to create pages that load very quickly. In this case, the A/B testing of ads is based on starting an experiment in a single campaign or using ad varieties, and are tested only on mobile devices. You will find more information on this topic here.

Don’t forget that all your advertising activities are addressed to your customers. They are your ultimate judges and decide which creation, photo or text suits their needs. Before setting up the tests, specify their purpose and the method of verifying their effectiveness.

This article has shown you that A/B tests are performed on more than just websites. Create tests for ads, headers, subjects, or mailing campaigns. Use them to draw the correct conclusions which will then contribute to the growth of your business.

8 threats you can avoid if you use email testing